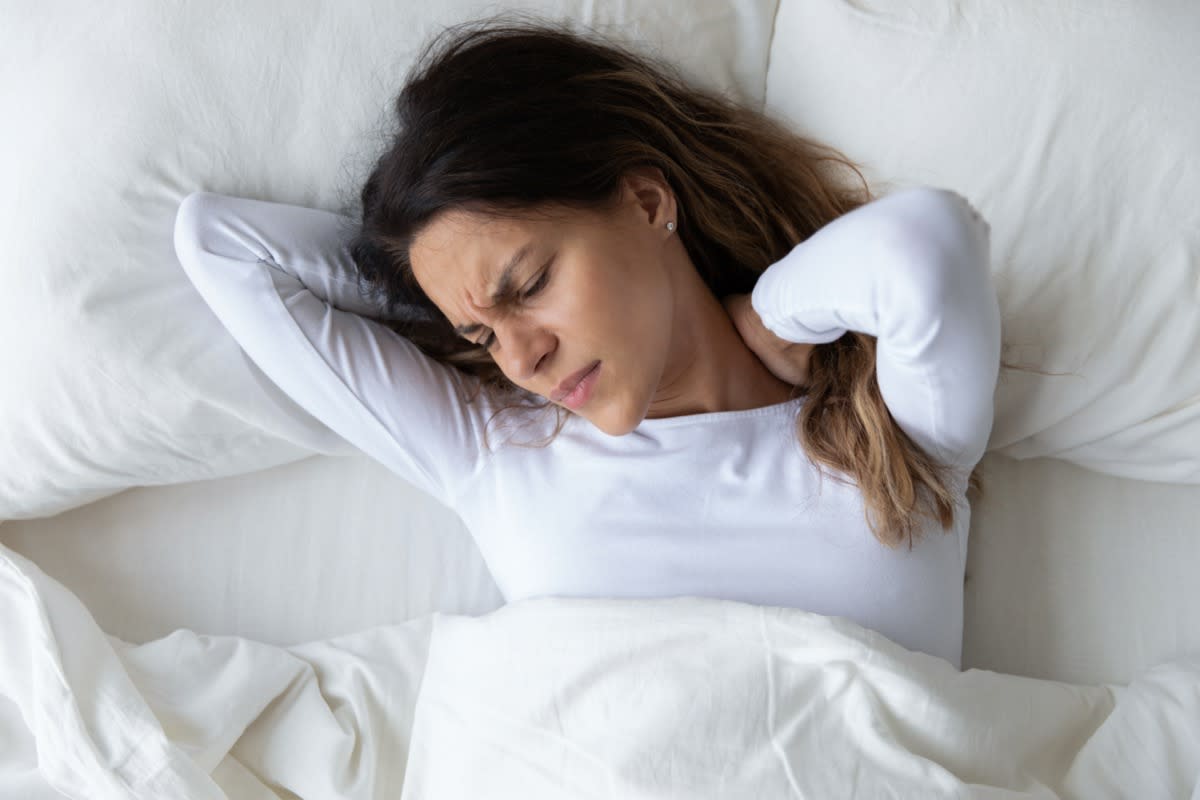 Bad sleep can cause more than just next-day crankiness—it can seriously impact your health. “I like to reinforce how common sleep disorders are,” says Nancy Foldvary-Schaefer, DO, MS. director of the Sleep Disorders Center at the Cleveland Clinic. “Sleep apnea affects 25% of people, more men than women before menopause, but after menopause, women are equally at risk and they have a lag to diagnosis because they don’t present with all the common symptoms. We probably are missing a lot of narcolepsy and hypersomnia because there’s not enough awareness in the general public about these conditions.” Here are five sleep disorder symptoms doctors want you to be aware of. Read on—and to ensure your health and the health of others, don’t miss these Sure Signs You’ve Already Had COVID.

Sleep apnea is linked to a host of dangerous health conditions, doctors say. “Sleep apnea happens when upper airway muscles relax during sleep and pinch off the airway, which prevents you from getting enough air,” says Jonathan Jun, MD., pulmonary and sleep medicine specialist at the Johns Hopkins Sleep Disorders Center. “Your breathing may pause for 10 seconds or more at a time, until your reflexes kick in and you start breathing again. Our lab and others have shown that sleep apnea is associated with higher risks of diabetes, independent of obesity, and that sleep apnea can increase blood sugar levels.”

Everyone snores once in a while—and it’s mostly just annoying for whoever has to listen to it. But did you know long-term snoring is linked to heart disease? “Snoring is caused by the tongue not having enough room in the back of the throat, particularly in those people who are obese, in heart failure or sleep on their back,” says Melvyn Rubenfire, MD. “There are chemicals in the brain whose job is to trigger breathing, and these can fail in some people who snore. As a result, oxygen levels drop dramatically, causing cortisone, adrenaline and other hormones to surge. These hormones contribute to high blood pressure and irregularities of the heart and can cause or exacerbate heart failure, trigger heart attacks, even sudden death. Even without snoring, people with obstructive sleep apnea have reduced oxygen in their system that can damage the heart.”

Restless legs syndrome, also called Willis-Ekbom disease, is a neurological sleep disorder linked to serious health conditions. “Anyone who has experienced restless legs syndrome (RLS) knows it’s a strange condition,” says interventional cardiologist Leslie Cho, MD. “As soon as you lie down, the urge to move your legs begins. No matter how hard you try, you cannot stop thrashing around or get comfortable. Although a connection between this strange syndrome and heart disease sounds unlikely, it does exist. Moreover , it was recently discovered that women with RLS are at increased risk of dying from heart disease… There are medications for RLS, but you should be examined for underlying causes like Parkinson’s disease and kidney failure treated with iron supplements. We also know that both men and women with RLS are likely to have Type 2 diabetes, obesity, high blood pressure and sleep apnea — all of which increase the risk of heart disease and heart attack.”

Narcolepsy is a neurological sleep disorder affecting how the brain controls sleep and wakefulness, with many people experiencing severe daytime sleepiness. “More research is needed to better understand the association between narcolepsy and heart health, but a number of factors may be at play,” says the American Heart Association. For most people, blood pressure lowers naturally during sleep, a phenomenon called nocturnal dipping. This is regulated by a protein called hypocretin, which is often deficient in people with narcolepsy. Research suggests an absence or reduction in this nocturnal dipping may increase risk for cardiovascular disease. Moreover, people with narcolepsy often also have conditions such as diabetes, depression and obesity, which are independently associated with heart disease.”

Insomnia affects 40 million Americans a year—but as with any sleep disorder, don’t hesitate to speak to your healthcare provider for help. “The idea that everyone needs eight hours of sleep is an old wives’ tale, but you do need to protect your personal sleep quota, whether that’s six hours or nine,” says Dr. Foldvary Shepherd. “It’s such an important part of your health… Cognitive behavioral therapy for insomnia is our treatment of choice. About 70 to 80% of people have improvement without the use of medication so it’s effective.” And to protect your life and the lives of others, don’t visit any of these 35 Places You’re Most Likely to Catch COVID.